A level success at St Bede's!

It was a day of celebration as A level results were released recently with two students into Oxford, four medics securing places to become doctors and our veterinary science candidate achieving the high grades she needed. Our high fliers set the standard which others followed as the results, across the board, were encouraging. "I want to congratulate all our A level candidates this year," said Mr Crabtree, "the students worked hard and the staff pulled out all the stops to support them. We are delighted to see so many of our former pupils heading off to their first choice universities."

Over a quarter of the awarded grades were A* or A with around half of exams being classified as A* to B. There were special celebrations for Will Semple and Jack Silver, who both scored straight A*s and will be studying physics at Oxford University, Sophie Booth (3As and 1B), Grace Dunn (3As), Divya Shenny (3As) and Joseph Udoyeh (3As) who will all be studying Medicine and Elsie Pemble who took her A levels last year will now be studying to become a vet.

Other notable achievements include Callum Bradshaw (2A*s and A) who will be studying Maths at Bath, Charlotte England (2A* and A) Economics at Leeds, Charlotte Burgess (A* and 2As) Engineering at Birmingham, Georgie Lynch (A* and 2As) Politics and International Relations at York, Charlotte Appiah (2A*, A, B) Maths at Nottingham, Timi Folaranmi (3As) Economics and Maths at Bath and Rachel Glover (A*, A and B) Art History and Visual Culture at Exeter.

Jack Silver is heading to Exeter College, Oxford to study Physics. "I am delighted by my results and that I have secured my place," he said. "Maths has always been my thing and during Year 12 we were doing some work on the Electromagnetic Spectrum and I realised that, if I did physics, I could use my maths skills to do something useful. I was so nervous when I went for my interview at Oxford that I did not do well and I was convinced they would not give me an offer. My message to anyone else would be work hard and don't give up.” 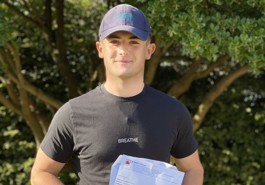